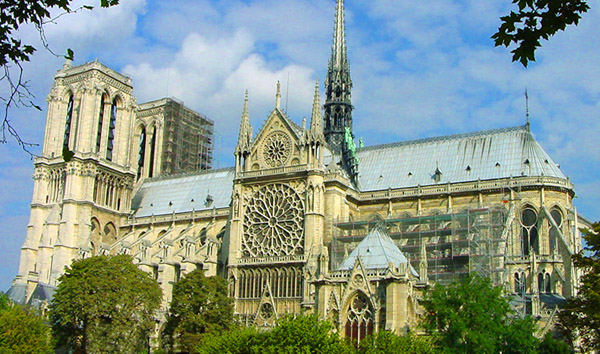 The cafes of Paris, the nightlife of Nice, and the inns of Provence are just some of the many faces of France and Monaco. The French excel at gracious living: artisanal foods, superb wines, and impeccable taste in all matters non-gastronomical as well. 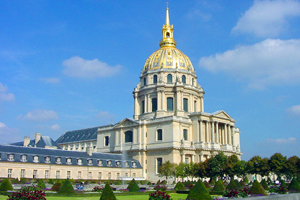 Paris is one of the most exciting and romantic cities in Europe, if not the world.

Fashion, architecture, history, fine dining, art … Paris has it all.

The Eiffel Tower, Louvre & Notre Dame are available in a day’s adventure. 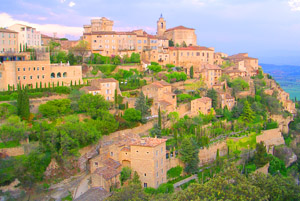 Discover Avignon, a vibrant town dominated by the Papal Palace where the popes reigned supreme during their schism with Rome.

Drive through the vineyards of Côtes de Provence. Continue toward the base of the great Montagne Ste. Victoire, inspiration for artist Paul Cézanne who obsessively painted it. 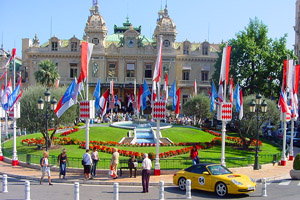 On the French Riviera, make your base in historic Monaco, made famous by actress-turned-princess Grace Kelly.

Luxury yachts line the harbor where the wealthy gather to play along the Cote d’Azur all the way down to Saint Tropez. 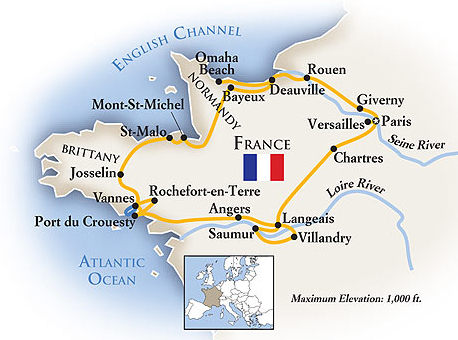 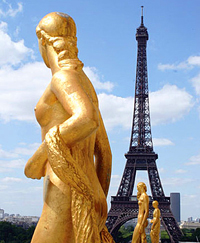 Travel from Versailles to Chartres. Watch a demonstration of the time-honored art of creating stained-glass, then see some of the world’s greatest examples of the art inside Chartres’ famous Gothic cathedral, among the most impressive in all of Europe. After touring the town of Chartres, continue on to Langeais in châteaux country, where you’ll spend the next two nights at Château de Rochecotte, once the private estate of diplomat Prince Tallyrand and the Duchess of Dino. Enjoy an immersive Loire Valley experience at Château de Champchevrier, a private country estate, where you’ll meet the Baron and his family, enjoy a reception and dinner, and witness a hunting hound demonstration in full regalia.
Lodging: Chateau de Rochecotte

For centuries, royalty and nobility built their magnificent châteaux in the Loire Valley, which also attracted poets, novelists and artists to find their inspiration in the lush forests and rich farmland of the “Garden of France.” Take a guided tour of Le Cadre Noir du Saumur, France’s famed national riding school, followed by a private visit to the vineyards of Le Moulin Bleu in Bourgueil for lunch and a wine tasting. Later, visit Château Villandry – reputed to have the most spectacular formal gardens in all of France.
Lodging: Chateau de Rochecotte

Day 4 – Medieval Angers
In the midst of the wine-growing area of the Loire Valley lies the 13th-century Château d’Angers, home to the famous Apocalypse Tapestry, the longest tapestry in the world. After a visit to this 17-towered medieval fortress to view its celebrated depiction of scenes from the Book of Revelations. Continue on to Port du Crouesty to enjoy a two-night stay in the elegantly furnished and quite unusual waterfront spa resort, the Miramar Crouesty.
Lodging: Miramar Crouest 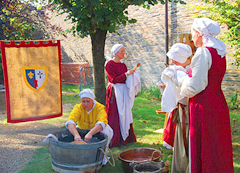 Start the day with a walking tour of Le Petit Mont, a Neolithic-era tomb that German forces used as a bunker during WWII. Take a sightseeing cruise among the islands of the scenic Golfe du Morbihan, followed by an excursion to Rochefort-en-Terre. This lovely 19th-century stone village has earned a reputation as one of France’s top floral towns thanks to a century-long tradition, begun by French-American painter Alfred Klots, of blanketing the town with pink and red geraniums each spring.
Lodging: Miramar Crouest

Day 6 – Vannes to Josselin
Brittany’s medieval history reveals itself as you take a walking tour, view the Cathedral and meander along the Promenade de la Garenne in Vannes. Visit the ancient town of Josselin and explore its castle, Château Josselin, one of the oldest châteaux in western France. Your guided tour reveals the castle’s turbulent history. Wind your way through idyllic Breton villages to St-Malo, where you’ll spend the next two nights on the English Channel coast.
Lodging: Le Grand Hotel des Thermes 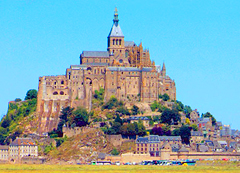 Considered to be one of the Western civilization’s premiere achievements, the impressive Abbey of Mont-St-Michel was once totally unreachable at high tide. Check out the range of architectural styles it embodies. Once the infamous base for French corsairs, the medieval port town of St-Malo, set dramatically overlooking the sea, offers much to discover on a guided walking tour of its atmospheric walled center, La Ville Intra-Muros.
Lodging: Le Grand Hotel des Thermes

Day 8 – Bayeux and DeauvilleSet out from St-Malo across the countryside on this most satisfying of Normandy tours to the coast, and view the famous Bayeux Tapestry. Your scenic drive includes a stop at Le Mémorial de Caen, commemorating the sacrifices of World War II and the battle for Caen, and featuring a Peace Museum and memorial gardens. Arrive in the seaside resort of Deauville and your beachfront accommodation for the next two nights, a spectacular 5-star Anglo-Norman country mansion that is the epitome of Belle Époque elegance.
Lodging: Royal Barriere Deauville 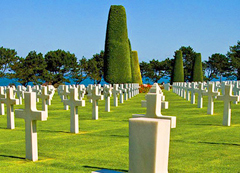 A poignant moment in all Normandy tours is a visit to the beaches on which Allied forces landed on June 6, 1944 to begin the World War II liberation of Europe and the long march to Berlin. Your memorable day includes an introduction to the momentous events of D-Day; a look at a private World War II memorabilia collection and visit to Pointe du Hoc, the 100-ft. cliff taken by the 2nd Ranger Battalion on D-Day.
Lodging: Royal Barriere Deauville

Day 10 – Medieval Rouen
Depart Deauville and travel to Rouen for a tour of this ancient city with a local guide, including a stop at the Church of Ste. Joan of Arc – a modern structure dedicated to the French heroine and saint who was burned at the stake here in 1431. Continue along the River Seine to Giverny to tour the celebrated home and oft-painted gardens of Impressionist painter Claude Monet. Your final destination today is legendary Paris – where your home for the next three nights is the Hôtel Sofitel Paris Arc de Triomphe in the heart of the city.
Lodging: Sofitel Paris Arc de Triomphe 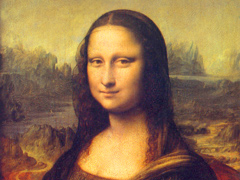 Check out such famous Parisian landmarks as the Eiffel Tower, the Arc de Triomphe, the glamorous Champs-Élysées and the iconic Cathedral of Notre Dame.
Lodging: Sofitel Paris Arc de Triomphe

Day 12 – Paris Musée d’Orsay
Immerse yourself in the works of the Impressionists during a locally guided visit to the famous Musée d’Orsay, whose great collection of 19th-century French Im­pres­sion­ist paintings, sculptures and art objects is displayed in the restored Gare d’Orsay, a former railway station built for the Paris Exhibition of 1900. In the evening enjoy a private farewell dinner cruise on the River Seine.
Lodging: Sofitel Paris Arc de Triomphe

Day 13 – Depart Paris
Your journey ends with a transfer to Paris Charles de Gaulle Airport. Allow a minimum of 3 hours for flight check-in. 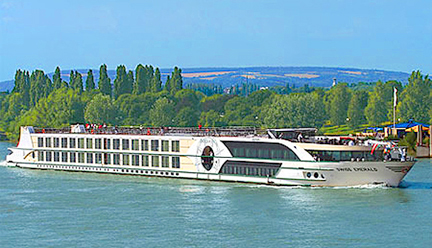 On one of the most enjoyable France river cruises you could imagine, journey from the jet-setting capital of Monte-Carlo into Provence to Arles for a cruise along the Rhône River to Lyon and then along the Saône.

Travel into the countryside past vineyards where some of the world’s best grapes become some of the world’s best wines, stopping to taste some of them. Discover river towns with Roman roots and lingering traces of medieval magic in their streets, experience the cowboy traditions and cuisine of La Camargue, and sample the pleasures of regional cuisine and wine throughout your trip. Explore a palace fit for a pope and an abbey that was once one of the most powerful in Europe. You’ll find something new, something wonderful every day. And during two nights in Paris, you’ll dine at chic Fouquet’s on the Champs-Élysées! 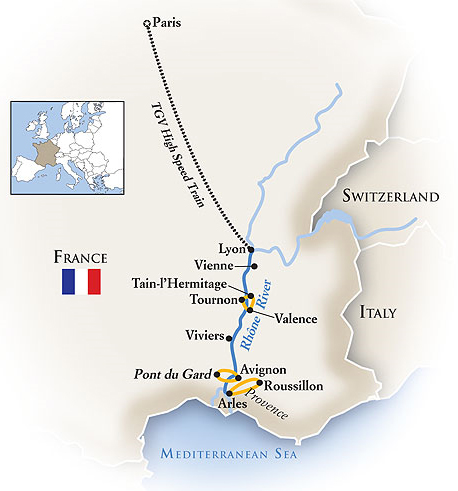 
This trip, we’ve decided to stray outside the region’s most famous pockets to show you our favorite hidden gems. You’ll see authentic Provence as you experience daily life in towns like Forcalquier and Pierrerue. You will stay in a 17th century convent, and go inside the labs at Occitane. View the sky from a local observatory, and learn about the red-hued houses of Roussillon on a private tour through the ochre mines. Best of all, you still experience the classics—with a twist. 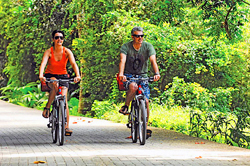